Have you ever known that God was calling you to leap into something scary and unknown? Has He ever asked you to step out of your comfortability and trust Him fully? That is what Matt and Kaylin did from the very start of their adoption journey. I’ll never forget speaking with them for the first time and hearing their hearts for adoption. They were confident that God had a design for their family that was unknown to them. And, even though they couldn’t see the finish line with their earthly eyes, they could see it through FAITH. Their faith led them to adoption and their trust in Jesus led them to their daughter Bri. Kaylin tells their story so beautifully below:

It was my complete honor to walk alongside this family and watch God SHOW OFF. As Kaylin says, “it was all for His glory!”

Our adoption journey, where to even start? At the end of 2018, the Lord totally wrecked our
lives, in a good way. A broken marriage/family was pieced back together in 2019, thank the good Lord.
We totally went all in and fully surrendered our lives to God. We began to seek the Lord for all things
including how and when to grow our family. At a women’s conference, I (Kaylin) felt the Lord place
adoption on my heart. This was news to me as I had not ever considered adoption. We conceived our
son without any issues, so this idea of adoption was kind of new to me. I remember getting a similar
look from Matt after telling him about this new idea than the look I got after telling him we were
pregnant with our son, both were surprises.

Thankfully after about 2 years of seeking the Lord, Matt too agreed this was a calling. I
remember him telling me we just needed to jump off the boat in faith. We both felt that we too were
adopted into Christ’s family and because of that we wanted to share the love we have. Honestly, I think
most of our family thought we were losing our minds because in all honesty we have our hands full with
our son. He is such a blessing that keeps us busy which is the least to say.

In January 2021, we jumped out of the boat and our comfort zones and began to pursue
domestic infant adoption utilizing Christian Adoption Consultants. Jonnilyn literally walked us through
every step of the way. Her calming, reassuring voice held us steady throughout the process. We were
home study approved in March 2021.

We began to see cases and received a handful of “not yet” s.

The wait was hard because my heart was so ready. In the fall we signed up with another agency in our state
who was known for “stork drops” which are situations where usually the baby is coming quickly. Things
tend to go much quicker in these situations. Since I had already been dreaming of this child for 2 years;
we told them we were ready whenever. Nothing about our adoption seemed to fit the usual/normal
process mold which is why each situation is so unique. I got a text about a situation on November 2,
2021 saying a baby girl had been born. The birth mother was allowing the agency to pick the family
which felt unusual. The agency called us first asking if we wanted her. I remember having to clarify with
the agency, “are you telling me she is ours?!” and the response was “yes if you want her”. What a crazy
conversation! “Of course, we wanted her!” I still laugh at that memory. So, we hopped on a plane the next day.

The trip was not without it’s bumps along the way
though. When we got there, the agency had not had a chance to tell the birth mother that they had
even picked a family or that we were there in the state.

We got to meet the birth mother the next day.
We both describe it as a Holy Spirit-filled, Reverent moment where we got the see the face of God while
meeting with this precious woman. We truly loved this woman as she was giving us the most precious
gift she could. It honestly made me think of when God gave us His perfect only son as a sacrifice for our
sins. This precious woman so clearly loved her daughter and was making a selfless decision due to
circumstances. We both feel she is the bravest woman we know. I can’t wait to share what an incredible
woman she is with our daughter.

After that meeting, we were on cloud 9. We couldn’t wait to see and hold our daughter. The
social worker came back only to tell us that the hospital policy had recently changed and that only one
set of parents could visit the baby. The social worker also told us that due to the baby being so little and
born early that it could be the following week before discharge. I remember falling from cloud 9 and
uncertainty set in. Obviously, we respected that the birth mother wanted to be the one to visit the baby.
So, we went back to our hotel and just prayed. Thankfully we had some prayer warriors on hand. Our
social worker had just given us a couple who had also recently adopted a baby girl with similar circumstances.

This adoptive mother prayed with us through every aspect. I remember her saying that
she was going to pray that surrender papers would be signed the next day. I thought that if this person
believes then we should too. We believe in the power of prayer, and we had already decided to pray
about everything. After all God had brought us this far. He had held our hand every step of the way in
this process so far. So why not give this to God too? So, we did. That night I read a verse in John 16:22
where Jesus is talking to his disciples right before his crucifixion, he says “So with you: Now is your time
of grief, but I will see you again and you will REJOICE, and no one will take away your JOY”. We were
both grieving for the loss of this birth mother or potentially for us should the adoption fall through.
Maybe we were ultimately grieving for the sin and death in this world as a mother is faced with a
decision like this. But Jesus goes on to promise we would see His face again in this situation and that
either way we would REJOICE. We had to come to terms of the likely possibility of her changing her
mind to keep her baby, and would that really be so bad? It wasn’t easy, but we felt a peace that God
was sovereign and in control and in the end our JOY would be in God. That peace washed over us like a
wave.

The next morning November 5th, we got a phone call saying that baby girl would be discharged
either that day or the next at 4 lbs. and 13 ounces. What a miracle? Apparently, God was moving
mountains. The following evening around 6, the birth mother began the process of signing papers. Every
time those doors opened our hearts would stir like crazy. The time creeped by. We didn’t know for sure
if she was going to go through with it until 8 pm that night when they were all done. Surrender papers
were signed; it was an answer to prayers! The moment we met our daughter was nothing like I had
envisioned for 2 years. Birth mom was saying goodbye the moment we met our daughter. It was a
bittersweet, gut wrenching moment with lots of tears, hugs, and promises. A moment we will never
forget. We immediately fell in love with our baby girl, but the pain of what that birth mom was losing
was ever present in the back of our minds. I know God has a plan, and we trust that His plan includes
our daughter’s precious birth mother.

We had initially had a name picked out for our daughter. After hearing that her birth mother
had chosen Briana for her; we felt led to go with Briana Ruth. Honestly every time I looked down at that
beautiful baby girl, I heard the name Briana over and over in my head. In Ruth 1:16 “Your people will be
my people and your God my God” is a verse that symbolizes our daughter’s story. God was involved in
every intricate detail of our adoption journey. It had its share of ups and downs, but yes God was still
evidently there holding our hands along the way.

Bri has added so much JOY to our lives. She is a precious gift from God that has even brought
our family closer. Her big brother even likes her most days.

If I can encourage you at all, I would tell you that God’s plan is best and to be trusted. His plan for your life is probably bigger and better than anything you could imagine or dream up. He is in the good and bad and even will work all the bad out
for your good and HIS GLORY. He gets the glory for our story.

If you would like more information on the adoption process or working with Christian Adoption Consultants, please email me: Jonnilyn@thoughtsofgrace1992 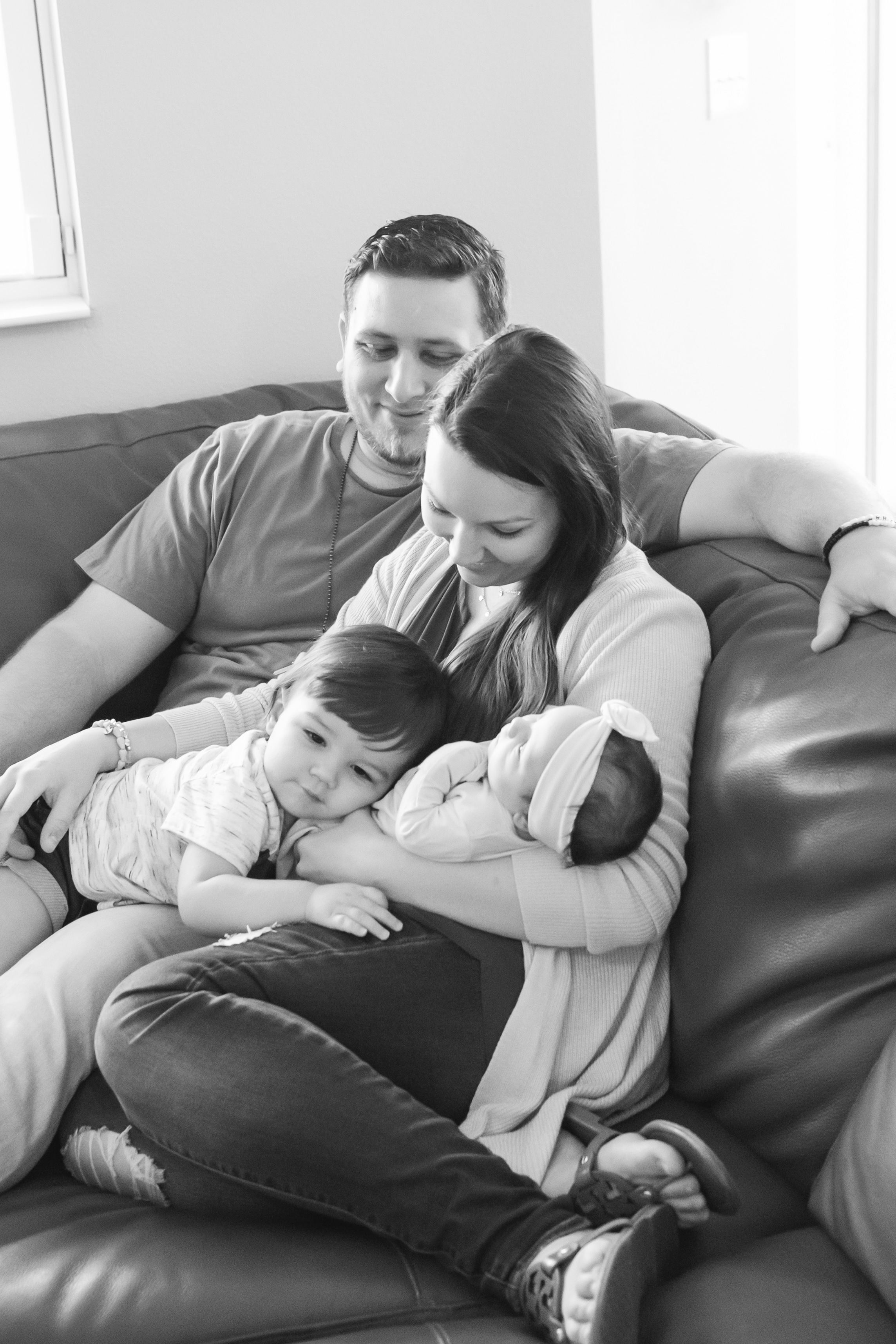